Using Embossing Paste to get more out of your Stencils!

Hey crafty friends!  It's Laurie here!  Altenew has a new Layering Stencil Set called Meadow Bush and I wanted to stop in and share!  I have 3 projects today with this awesome new set, and I've throw in with a little Altenew Embossing Paste!

Meadow Bush Layering Stencil set has 4 stencils.  The first 3 create the blooms and the last is the stems and leaves.  When I first used this set I saw that having some dimension in the blooms would be so fun.  I created a card for release day and I knew I wanted to try it again! 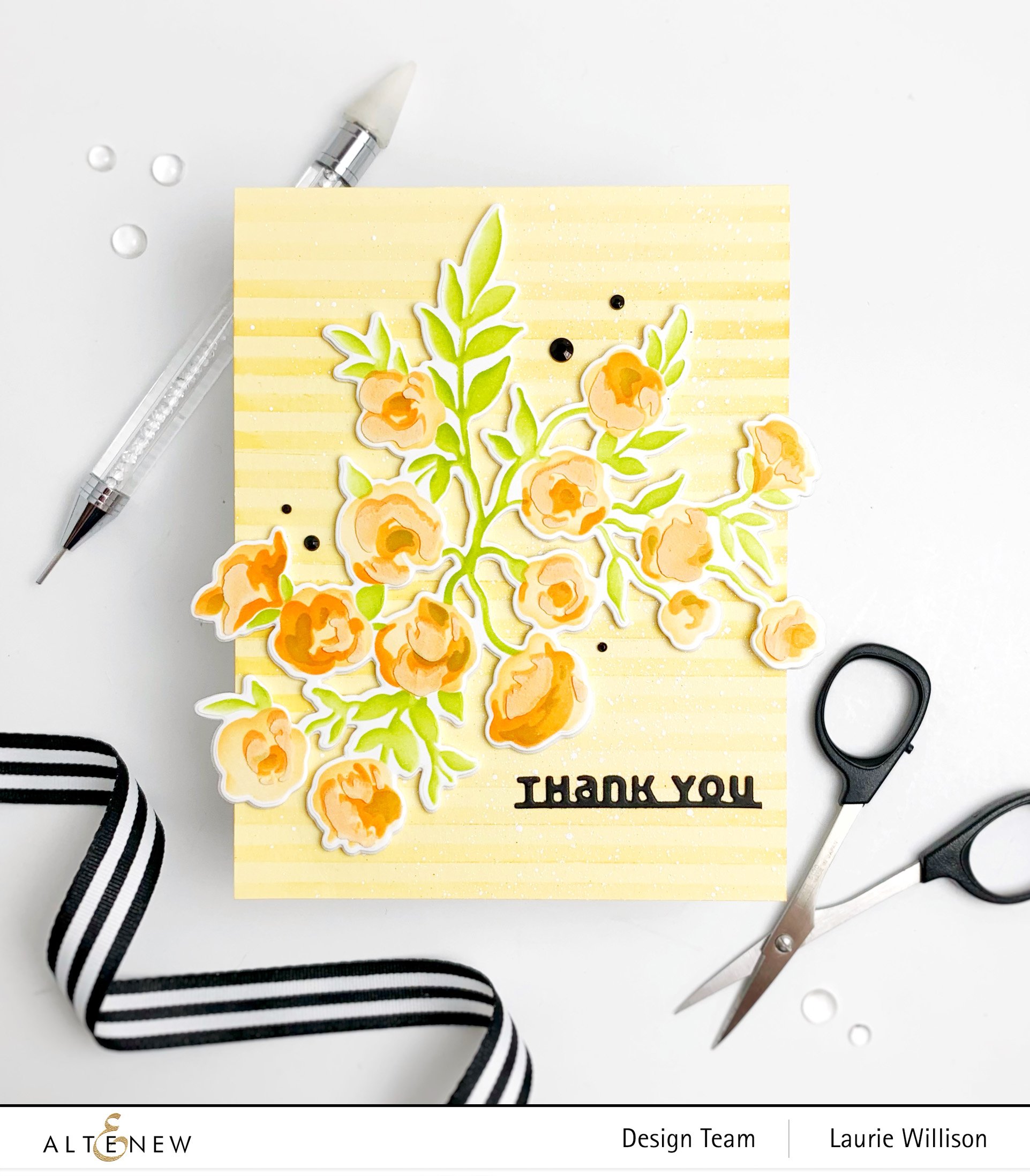 To create this card, I used Classy Stripes Stencil on a yellow card base and then added in some white paint splatters. I stenciled out the Meadow Bush using the Warm and Cozy Altenew Ink set.  After die cutting the image, and on the last stencil, I used Altenew's White Embossing Paste to give it a little dimension.  With black cardstock, I die cut one of the new Slim Sentiments Dies out and trimmed it down to use the “Thank You”. 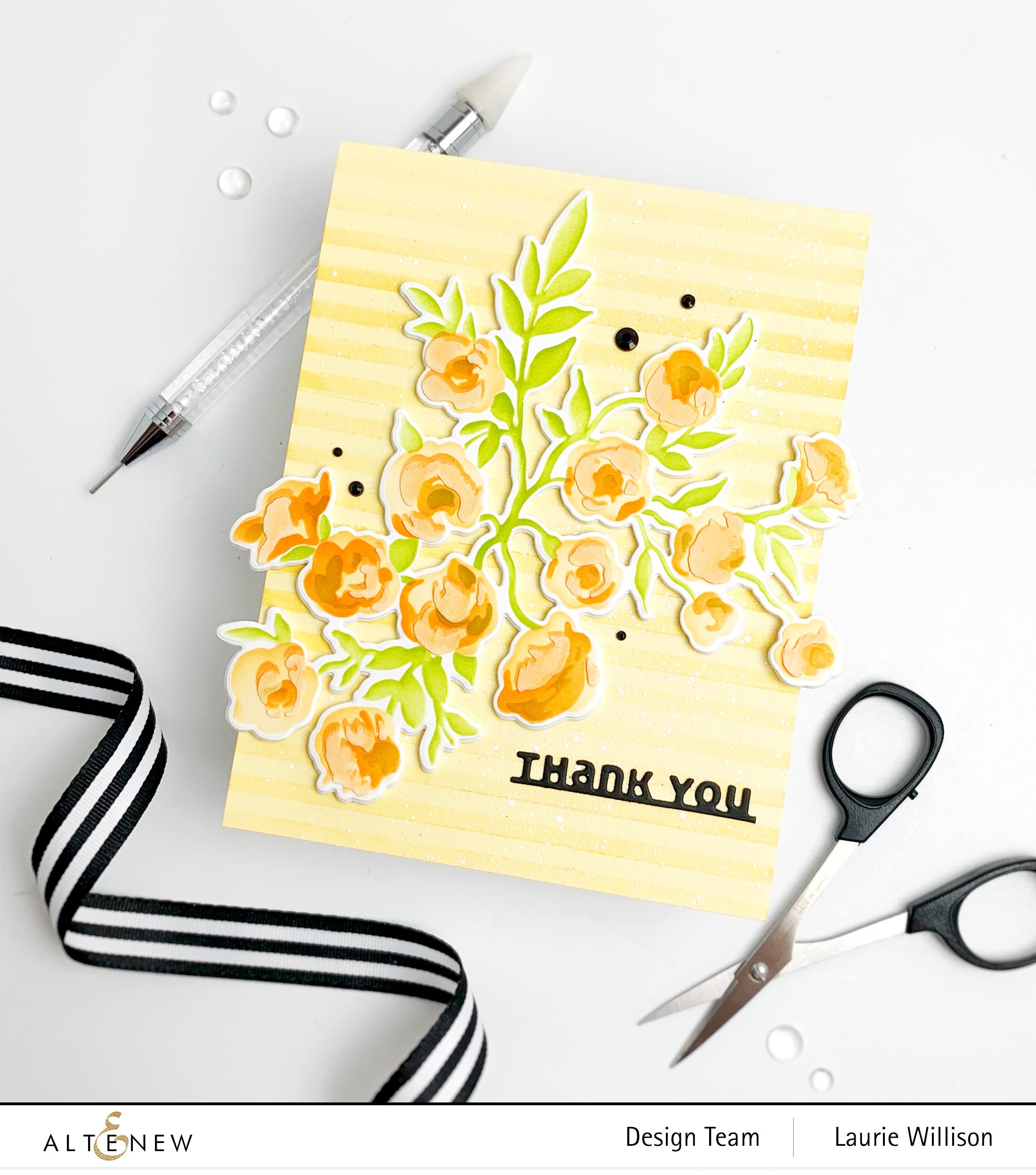 I got a little more daring on this next card.  On this one, I used Altenew's White Embossing Paste and a couple reinkers to add some color. 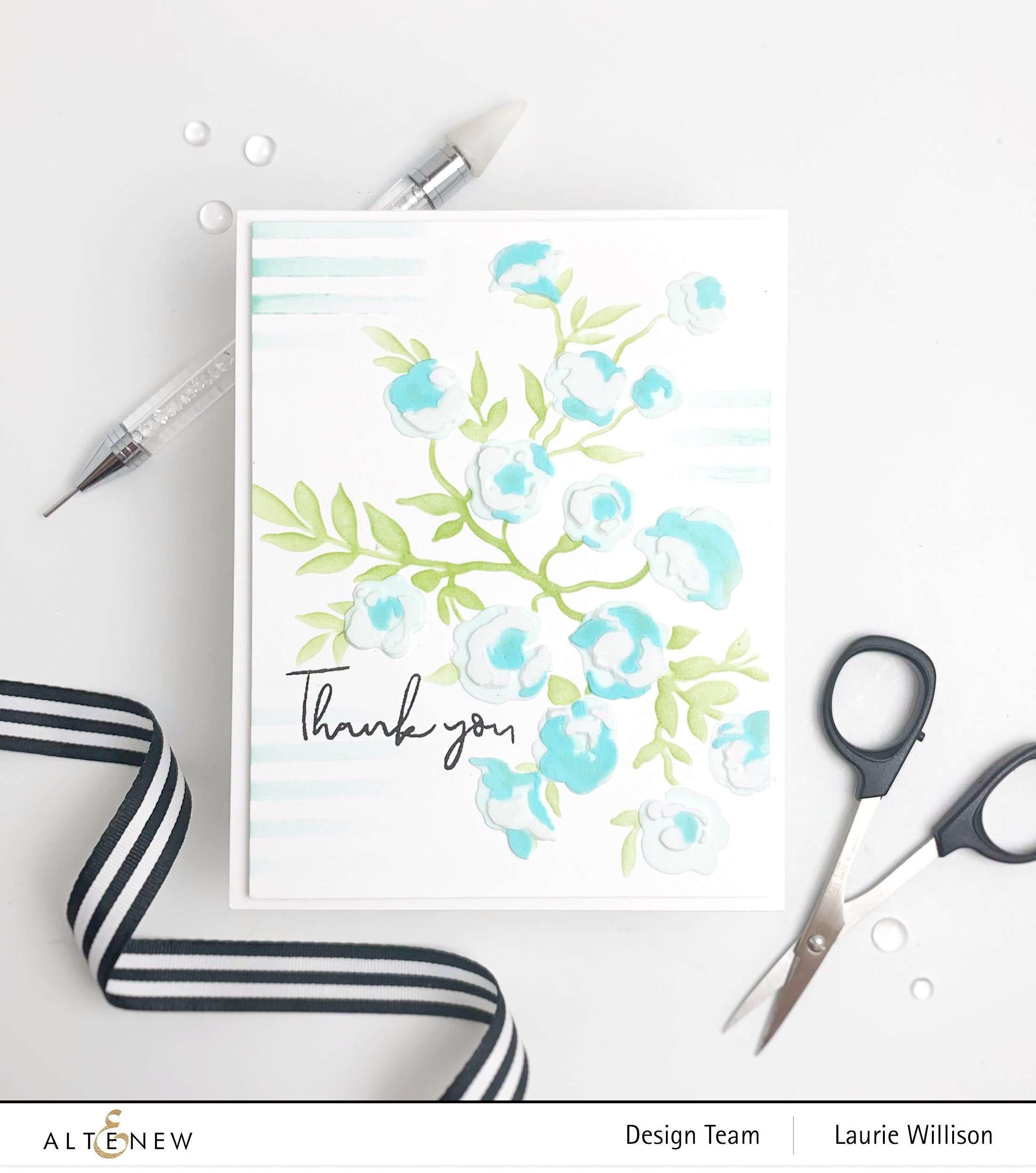 The first step was to ink blend in some Forest Glades ink for the greenery stencil.  Next, I used Sea Glass for the first layer to create the soft blue.  After letting that layer dry for awhile, I added some Ocean Waves to the paste for a little bit darker layer.  The last layer I left white to keep the blooms looking soft and fluffy! 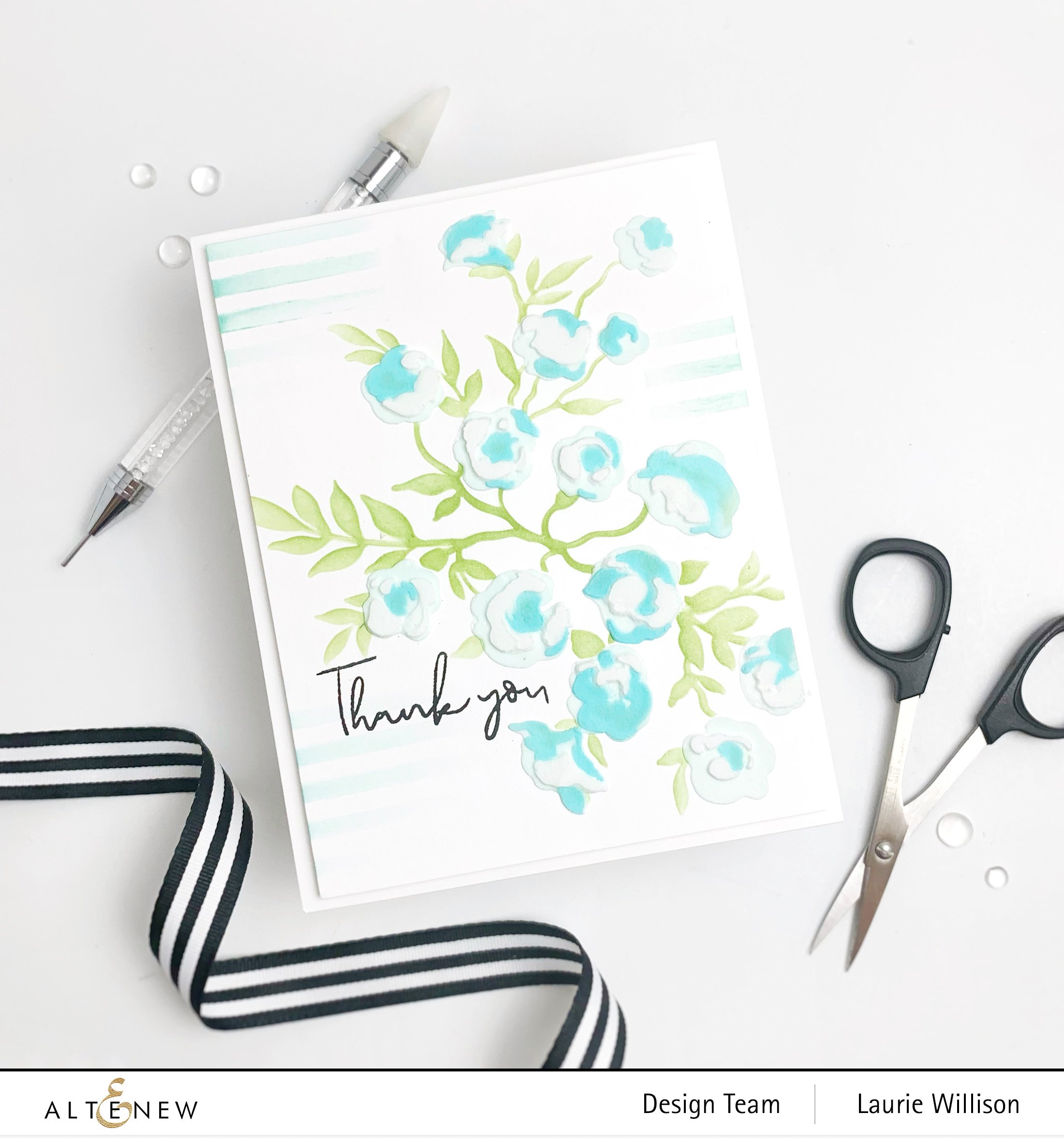 Classy Stripes Stencil is one of my all time favorites, so I grabbed it again and added some distressed strips around the image.  To finish off the card, I added in the sentiment Thank You, from the Paint-A-Flower: Calla Lily stamp set. 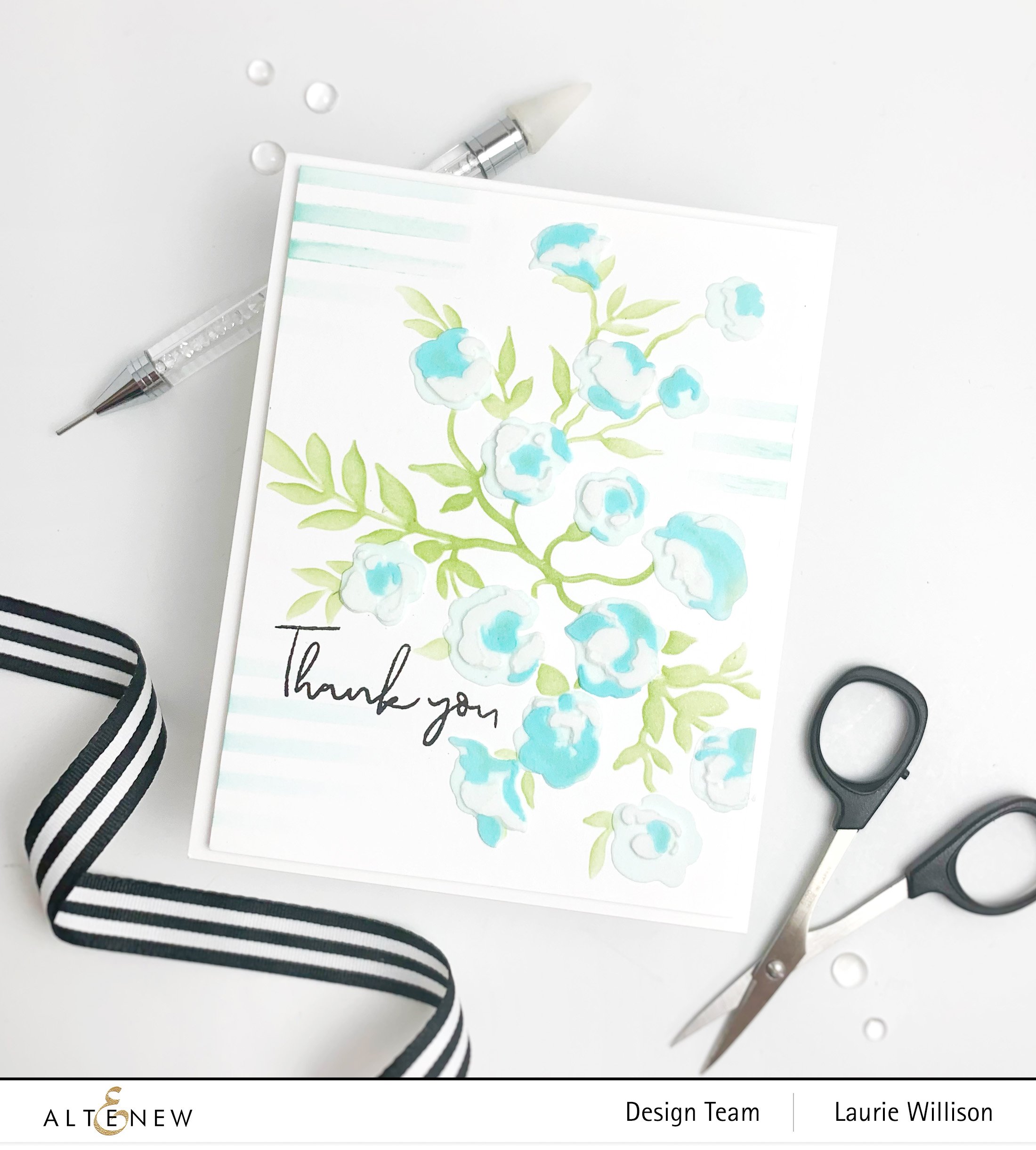 One last project combing the Meadow Bush Stencils and the Classy Strips Stencil. 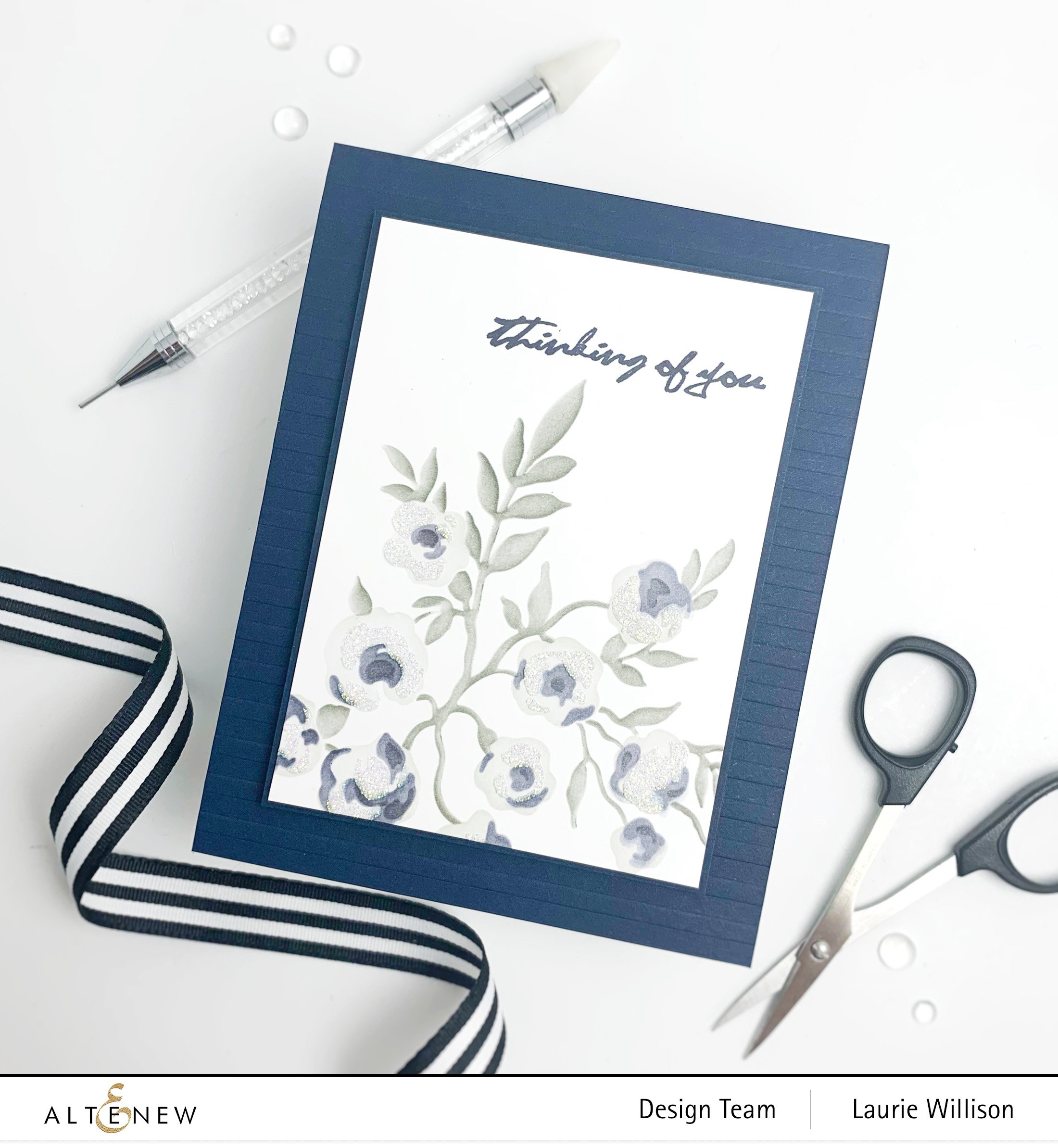 This time I used the stencil to emboss the navy blue card base.  That is such an easy detail to add in! 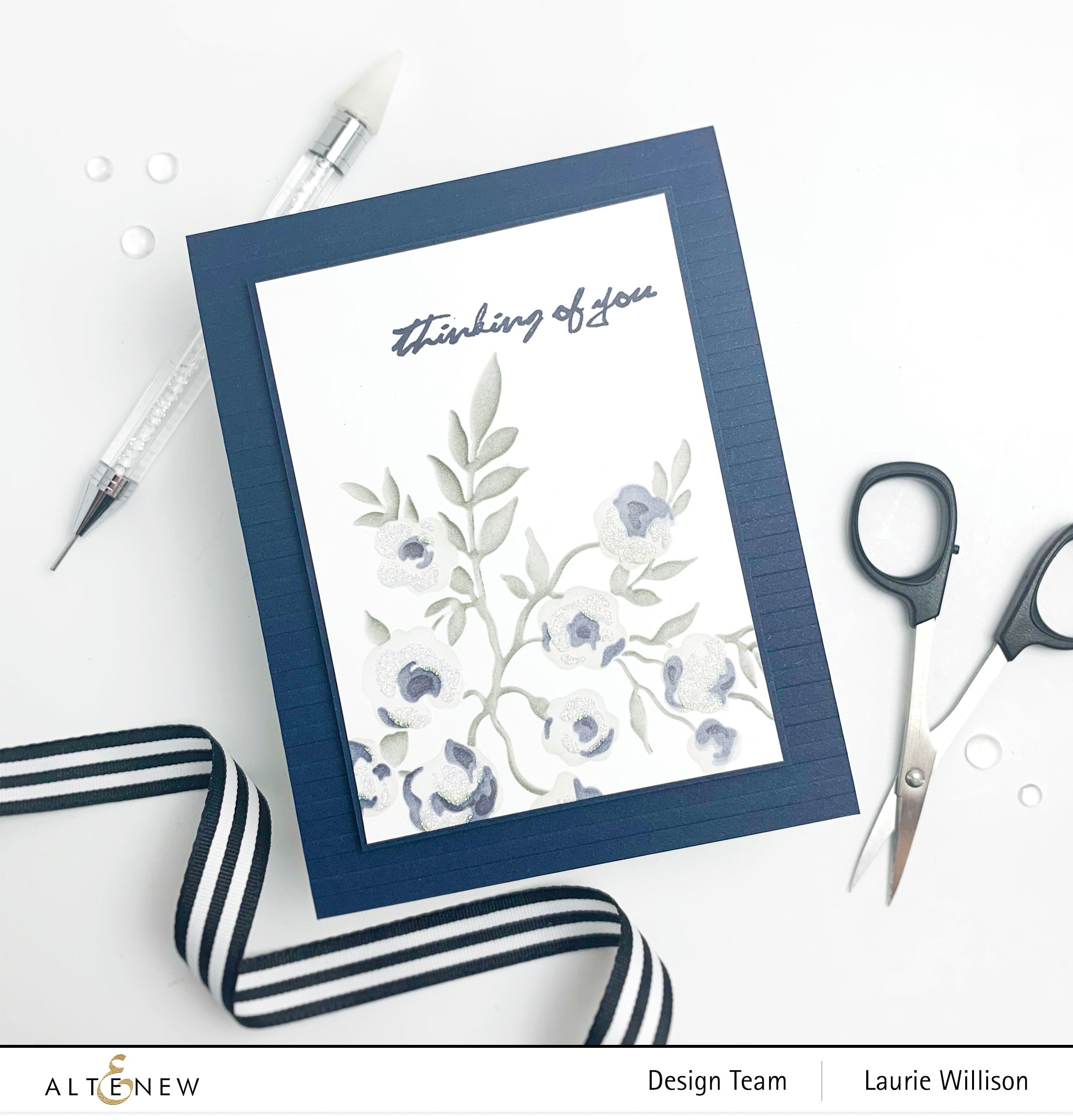 Using Cloudy Night and Charcoal Suit Inks, I blended up the stems and flowers and then also added a layer of Dark Night, to create this more muted version of the blooms. For the last layer, I added the white embossing paste and then did a little sprinkle of glitter on top.  I love the extra texture it added to the card.  To finish it up, I cut the panel down and matted it in the same dark navy cardstock and then popped it up on the embossed card base. 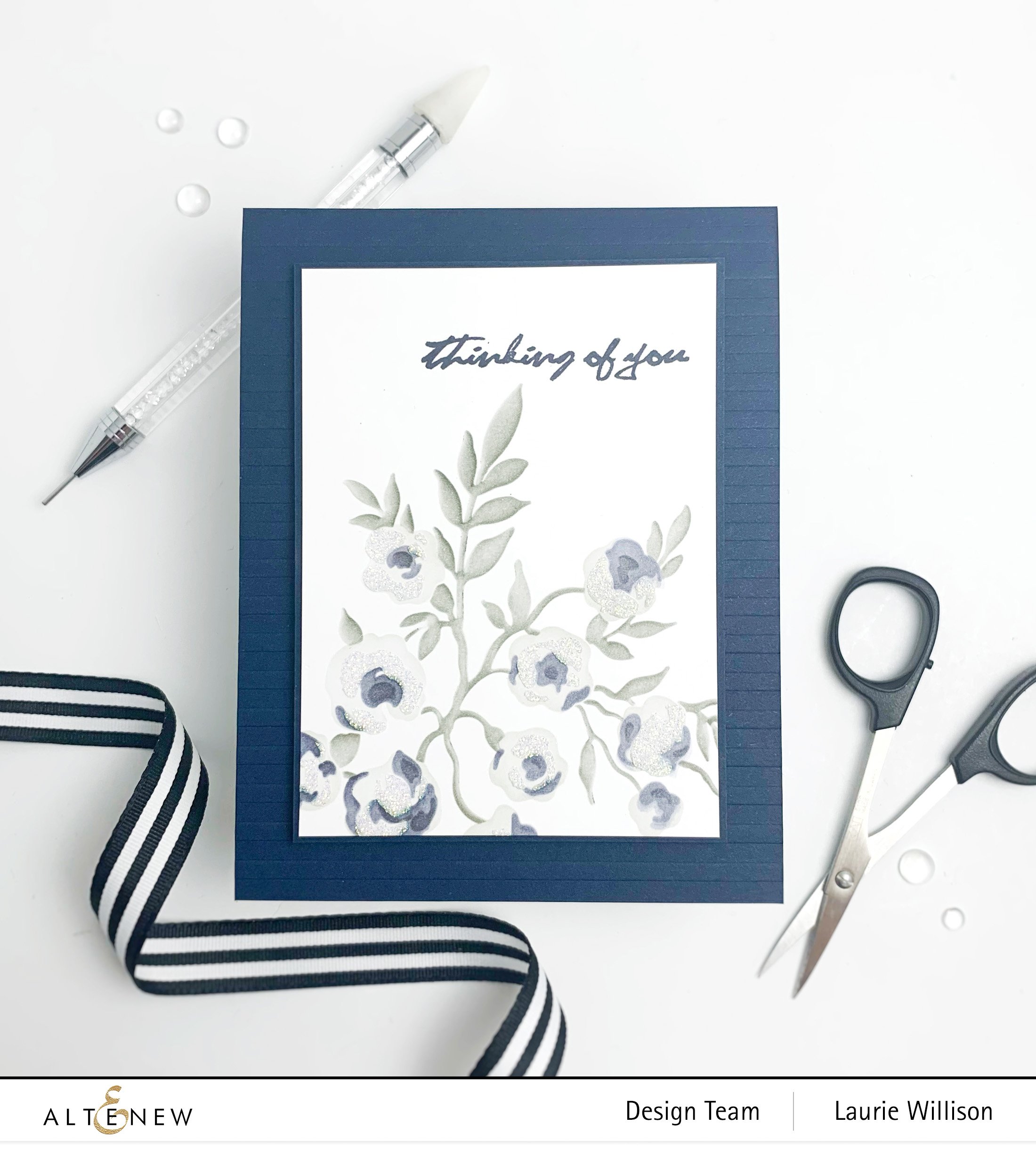 I hope you enjoyed today's projects! The new Meadow Bush Layering Stencil Set is so much fun with lots of possibilities!  I had so much fun sharing!  Have a great day! 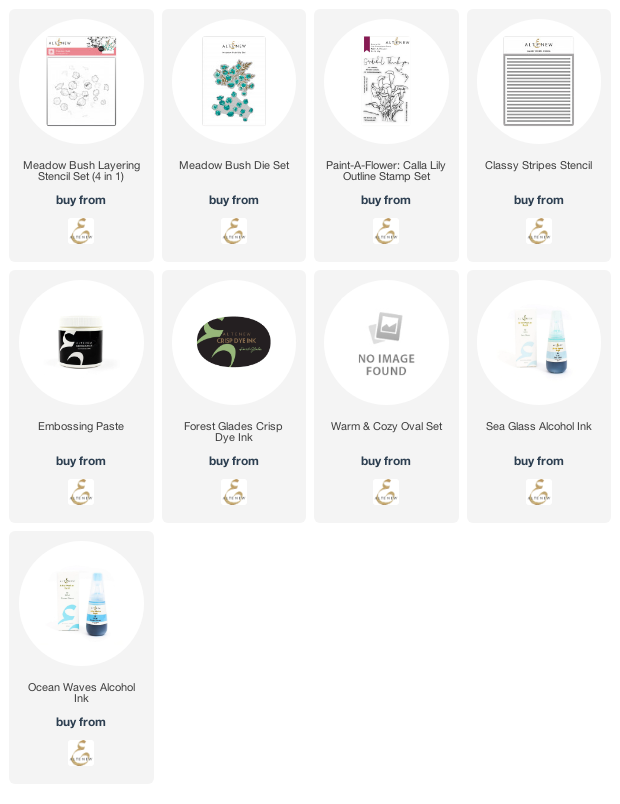 I am a SAHM, Travel Planner and Paper Crafter. I love clean and simple cards and all the colors of the rainbow!

That is an awesome idea!

These are Gorgeous!! Great ideas! Thanks

Yet another cool technique to try! Love it….

These cards are so beautiful! What a fabulous idea to use embossing paste. Thanks for sharing.

Hi from Sugar Land !
Would love to see video. So you didn’t use the stencil and apply the paste over it?

Love the kiss of Dimension from the embossing paste Laurie. All beautiful projects today!! Thanks for the inspiration :)

Laurie, these are gorgeous, thank you for the inspiration. In future, it would be helpful if one of your three photos of your sample cards was a close-up of a detail on the card. Like, I would love to see a close-up of the embossing paste to get an idea of how thick it is, how much glitter you used, etc. Gonna try this over the weekend!

Very very cool idea! I just got this set today so I’m excited to try your idea!

I can’t wait to get this set. Such a cool idea!

Laurie, I just happened to try to catch up with my emails from Altenew and I ran across your cards that you used ” The Meadow Bush Layering Stencil Set” with embossing paste, for the Blog Hop. I just had to say what Beautiful cards you made. They really drew my attention, three totally different cards where you used the same stencil set. They are stunning. You make beautiful cards Laurie, they always inspire me, you are so talented. Thank You for sharing, if you would will you please do a video using the embossing paste so we can learn it’s proper usage. Please think about it okay. Have a wonderful day and keep up the great work.