Hi, friends! Erum here, and today I am sharing three cards, a couple of bonus cards, plus a video using the Kind Reminders Bundle.

Let's start with the easiest card!

I started by heat embossing several images on aqua cardstock in Pure White Crisp Embossing Powder. Next, I used the Artist Markers in Ocean Waves and Sea Glass from the Cool Summer Night Set to add flicks of color where the petal ends. After this, I used the coordinating dies to die cut the images.

For a bit of texture, I ran my card front through the die cutting machine, sandwiched with a stencil to get an embossed pattern. The stencil used here is the newly released Woven Stencil. Then I took Ocean Waves Crisp Dye Ink and applied it with the help of the Large Blending Tool as gently as I could so it would only ink the raised/embossed pattern.

Then I adhered all the die-cuts onto my card front with foam tape and cut off the overhanging bits. For the sentiment, I used Cloudy Night Crisp Dye Ink. And to add a bit of sparkle, I also used a bit of Silver Glitter Tape.

Keeping it Simple and Classy

I started by running my Spicy Yogurt Cardstock panel partially through the die cutting machine along with the Dotted Swirls Debossing Cover Die. Then, I added Navy Gold Trim Washi Tape onto two strips of blue cardstock from my stash and adhered it where the pierced pattern ended.

I stamped the flower onto Crest Solar White Cardstock in Permanent Black Crisp Ink. And then, I colored the image with Artist Markers from Warm & Cozy and Glacier Caves. Then, I fussy cut it and set it aside. Next, I used Obsidian Pigment Ink to stamp the sentiment. And then, I adhered the image with foam tape.

How to Add Shading Through Kind Reminders Simple Coloring Stencil

I used Classic Crest Solar White Cardstock and stamped the images in Obsidian Pigment Ink. Next, I used my heat tool to thoroughly dry the panel as Obsidian Pigment Ink takes a little time to dry. Once I was done, I used the Kind Reminders Simple Coloring Stencil and secured it to the panel with washi tape. You will also need to cover any other exposed bits that are close by to avoid mistakenly inking through those.

For the flowers, I started by adding Sunkissed Crisp Dye Ink to the entire layer and then Orange Cream Crisp Dye Ink just in the center with the Large Blending Tool. Then, for the second layer, I used a heavy hand to apply Orange Cream Crisp Dye Ink. Even in the image, you can see that my flower center is darker compared to the outer petals! So, instead of inking through the stencil with just one shade of ink, I used the Large Blending Tool in a way to add shading!

I did the same thing with the leaves, but those turned out more interesting and dimensional! The inks used for the leaves are Eastern Sky and Ultramarine Crisp Dye Inks. I applied the first layer of Eastern Sky Crisp Dye Ink with a very light hand. Then, using the blending tool at an angle, I applied Ultramarine Crisp Dye Ink closer to the end of the leaves, where they are coming from underneath the flower. And boy! You need to watch the process and video and see for yourself how incredible it looked with just the first layer and shading!

Then, for the second layer, I used the Ultramarine Crisp Dye Ink heavy-handedly.

To add more faux dimension, I used Warm Grey Artist Markers to add shadows. Then, I decided to color the entire panel with the lightest one, Morning Frost.

Then, I added fine black paint splatters from the Watercolor 36 Pan Set and stamped the sentiment in Obsidian Pigment Ink.

So, here are my three cards featuring the Kind Reminders Stamp Set. I hope you liked them.

Below is the process video for the last card I shared. This shows you how to add shading through the Simple Coloring Stencil and using Altenew's Large Blending Tool. You can even watch the video on YouTube!


Here's a last look at the three cards!

If you need more inspiration, I did share one more card on the release day using the Kind Reminders Stamp Set.

You can find the information regarding this in THIS post.

And here's another card that I made for the new stencil release. Just change the background color, add a piece of cardstock, and you can achieve a new look!

The details for this card can be found HERE.

Thank you for stopping by! See you next week with another Creative Coloring with Erum video! 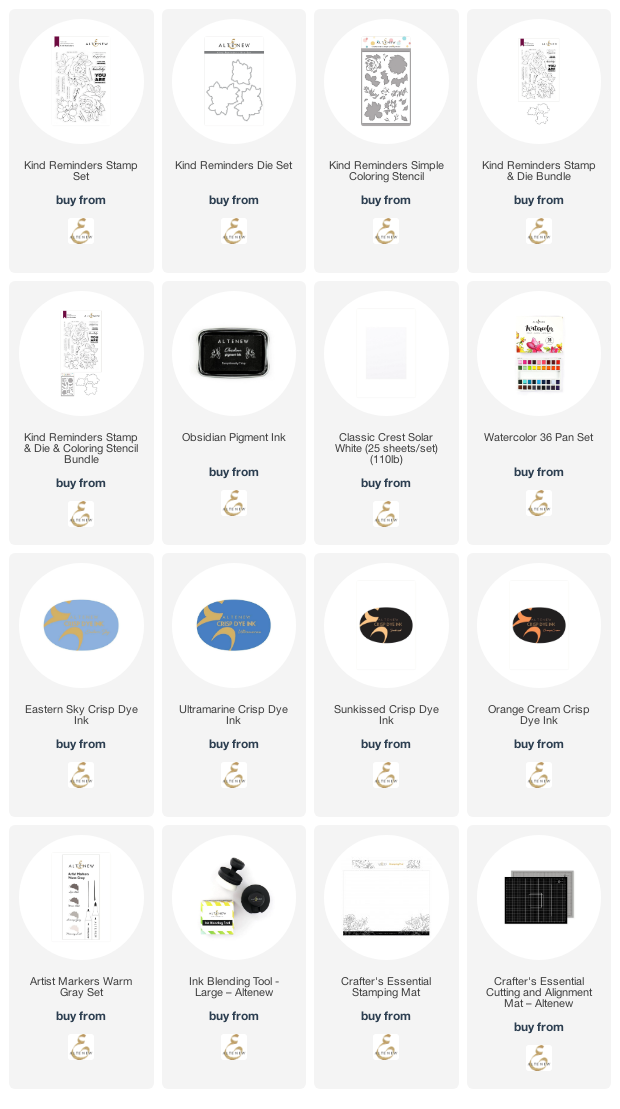 5 Memorable Valentine’s Day Cards for Anyone |...

For Erum- thanks for the video! I would never have guessed you achieved that level of flower/leaf dimension with a stencil. I hope you feel better soon!

Just lovely and the coloring stencil really added allot to the final design. Love it!

Gorgeous cards. Your coloring always inspires me. I love those Simple Coloring stencils. I’m on the “Notify Me” list so hopefully I can get my hands on them soon.

WOW!!! These cards are amazing! I particular liked the solid blue tone card. Super Super pretty! And your video was amazing! I love how you did the shading around the images, it makes the flowers pop of the pages. Having non traditional leaf colours was so much fun! I hope you get better soon and your cold goes away!

Great set of project shares. The video for the layered stencil use is really neat.